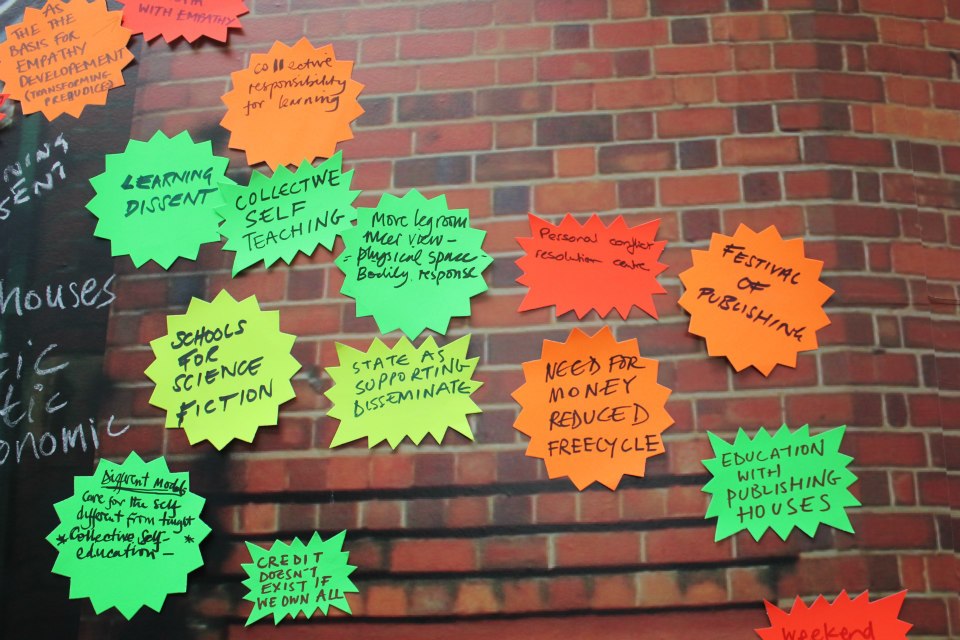 The Freee art collective produced a new work for Movement entitled Prognosis Kiosk. The future use of a series of buildings in a regeneration zone was subjected to utopian scrutiny. With a completely transformed society in mind, assuming that everything has been democratized, from the workplace to the town planning office, including all economic and political decision-making, Freee hosted workshops to discuss how to occupy the buildings we already have. Rather than gentrify the site Freee explored how to convert a neglected place into a thriving Socialist community for the twenty-first century. Using drawing, erasure, signage, instructions and descriptions, Freee overlaid utopia onto the physical infrastructure of deindustrialized capitalism. Rather than simply producing an imaginary world out of the existing one, Freee made constructive proposals for real changes. Images of places will be montaged with alternative uses, occupations and collective arrangements. Montage is not simply a ‘critical’ tool for changing our perception of things or challenging our preconceptions; montage asks us, what are you going to do with the world to change it?

Large billboard size images of the buildings were pasted to the walls of the gallery. New signs were made to signify the changed uses of the buildings and some of these were hung on the photos to indicate the proposed changes to their function. Also the participants in the workshops wrote and drew on the posters to demonstrate, describe and explain the changes on which they have agreed. The gallery was therefore transformed from a space of visual display into a working space for transformative collective planning–a prognosis kiosk!

Viewers who visited the gallery after the workshop had taken place were invited to add to the work with their own proposals, so that the work became a document subject to revision by those originally excluded from the process.